Our Disneyland Crowd Calendar will help you avoid the crowds and long lines at Disneyland. Theme park attendance fluctuates significantly throughout the year, so choose the optimal dates for your next Magical vacation by avoiding the crowds at peak season.

With this Disneyland crowd tracker, you will be able to compare crowds at different times of year to determine the best period to visit Disneyland and Disney’s California Adventure theme parks. It is updated once a month with data for the following 12 months.

We hope our Disneyland Crowd Calendar will help you optimize your next magical Disneyland vacation!

*  UPDATE: Due to COVID-19, Disneyland will remain closed until further notice. Please check back for updates.  Stay safe!!

Disneyland Resort is usually referred to as simply “Disneyland.” The park opened in 1955 under the direct supervision of Walt Disney,  16 years prior to the opening of Disney World. The resort was the first Disney’s theme park location and the only one opened while Walt Disney was still alive.

Disneyland Resort is located in Anaheim, California and is owned and operated by The Walt Disney Company.

What are Crowd Calendars?

Crowd calendars predict how many people will be at a theme park on any given day throughout the year. Since most people would rather avoid the crowds and long wait times for attractions (obviously), a crowd calendar can help you narrow down your vacation periods to the times of the year when the park is less crowded and more manageable.

In order to formulate this crowd calendar, we compile attendance data from recent years to help us determine which days will have the shortest lines and longest lines at Disneyland Park and Disney California Adventure.

When is Disneyland Least Crowded?

Disneyland is the second most visited theme park in the world (18 million visitors per year compared to Disney World’s roughly 58 million). Therefore, don’t expect that you will have the park to yourself at any given time of the year. But if long lines are a major concern, then there are some less busy time periods you should aim for.

When is Disneyland Most Crowded?

Disneyland is typically most crowded around holidays, weekends, or really just about any time schools are out of session. Here are some of the time periods to avoid, if possible:

When is the best time to visit Disneyland?

There isn’t really a right or wrong time to visit Disneyland. The best time will really depend on your own set of interests.

If visiting when crowds are expected to be lower is a major factor, then plan to your trip mid-week (Tuesdays through Thursdays) during off-peak periods.

Lines will be shorter:

The disadvantages of going during the off-season are:

1. some of the nighttime entertainment may be scheduled for weekends (and not during the mid-week)

2. certain rides may be shut down for maintenance

3. the park hours are usually shorter during off-peak times and longer during the summer and other peak times, and 4. there are fewer events, fireworks, shows, and parades during the slow season.

With that said, the most crowded periods aren’t always the “worst” times to visit Disneyland Resort.

Disneyland’s two theme parks do tend to be more crowded during the summer months (June, July, August).  However, the parks extend their hours every day from late-May until early September. You can also expect the theme park to operate with longer hours during holiday periods and school breaks, as well as host more shows, parades, and fireworks.   So there is plenty of trade-offs to consider and when you should visit Disneyland. depends on your priorities.

Check the Park Hours section for a list of hours, events, entertainment, and refurbishments.

Disneyland benefits from Anaheim, California’s warm and relatively dry climate. The city averages just 14 inches of rain per year compared to the US average is 39 inches. Here is a chart of what you can expect for weather at Disneyland. 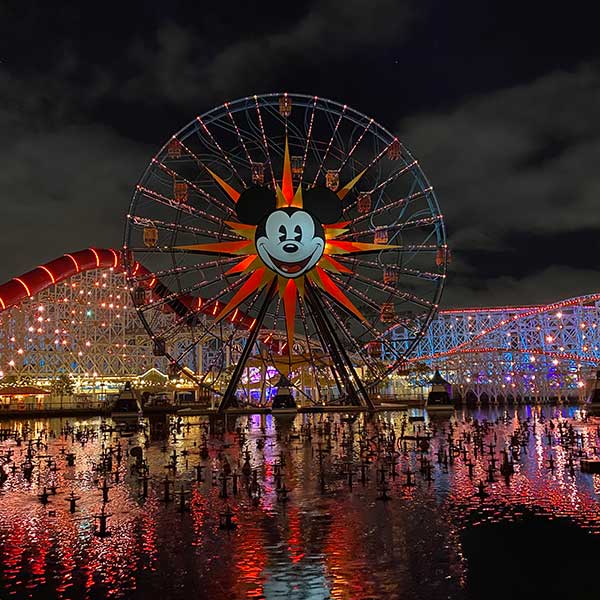 Disneyland has a number of restaurants in the Downtown Disney District.

Disneyland’s FastPass is a free service that allows you to make a reservation for a specific attraction. You get to bypass the regular line and breeze on the ride with little to no wait time. FASTPASS machines are located throughout the park.

Disneyland MaxPass is a premium service that allows you to make FASTPASS reservations from the convenience of your smartphone.  MaxPass costs $10 and it includes PhotoPass benefits.

You can learn more about Disneyland’s FastPass system here.

If you need help planning and booking your magical Disneyland vacation, please contact the Disney Travel Agents at The Vacationeer. Their services are always helpful and totally free of charge. Call 833-4MY-TRIP  (833-469-8747) for a free, no-obligation Disney vacation quote!

The MagicGuides Disneyland Crowd Calendar keeps you updated on the crowd expectations. Check back often so you won’t miss out!

If you enjoyed our Disneyland Crowd Calendar page, be sure to check out our other articles. Our Disneyland Map, Disneyland vs Disney World, Disney Dining Plan Calculator, and Disney World Planning Timeline may be helpful.

Thank you for reading our page, and we hope you have a magical Disneyland vacation!

Disneyland Vacation planning can be overwhelming. We hope you’ll consider our friends at The Vacationeer to help. They’ll plan every detail of your Disney stay to maximize the fun and minimize waiting in line, all while getting you the very best pricing available, and it’s completely FREE!  Click to get your FREE QUOTE TODAY!