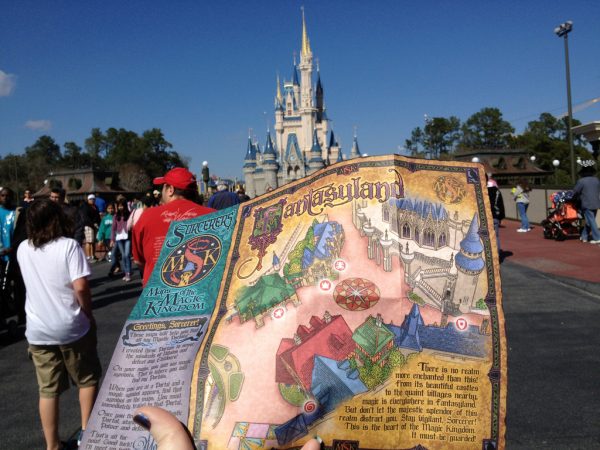 Are you looking for a fun and unique way to explore Disney’s Magic Kingdom that doesn’t involve any rides and attractions? If so, look no further than the Sorcerers of the Magic Kingdom scavenger hunt. This interactive card game is free to play with park admission and fun for the entire family.

So what is the Sorcerers of Magic Kingdom card game and how is it played at Disney World? Continue reading we will show you everything you need to know.

What is Sorcerers of the Magic Kingdom?

Sorcerers of the Magic Kingdom may sound confusing at first blush, but its actually quite easy to understand once you start playing. Let’s start will the backstory of the card game.

The idea of the game is this: Merlin is attempting to stop Hades and his cohorts from gaining control of the park. And that’s where you come in.

Merlin is recruiting guests within the park to be his apprentices.  As Merlin’s apprentice, it’s your job to help him attack these Disney villains throughout the park and, ultimately, help to thwart Hades from gaining control.

You will be tasked with battling each of the villains first. Then, in order to win the game, you will go toe-to-toe will Hades in the final battle. If you are successful, you will save Magic Kingdom from these forces of evil.

The battle takes place at various “portals” throughout Magic Kingdom’s lands. Tomorrowland is the only land were no battle will take place. 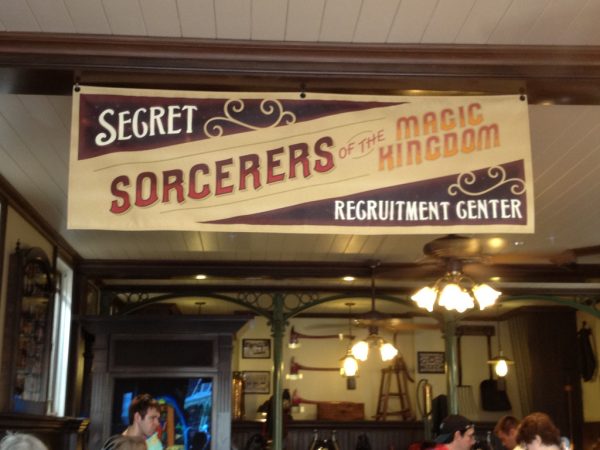 What you should know before playing Sorcerers of the Magic Kingdom

How do you play Sorcerers of the Magic Kingdom? 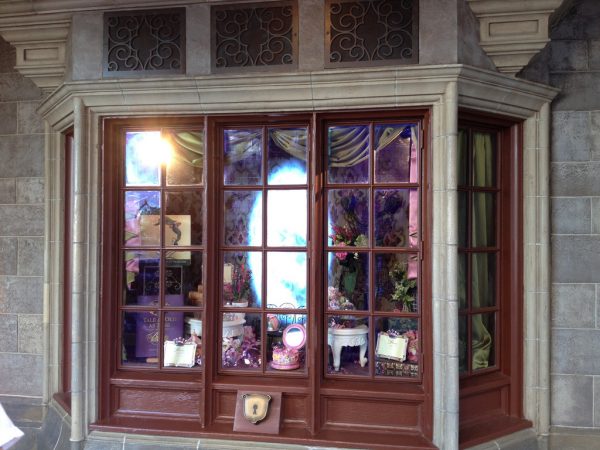 In order to play the game. Merlin opens up “Magic Portal” areas so that you can fight the villains and interact with the characters. The map shows where each of these portals is located (see the maps below).

First, look for the sorcerer’s crest on the ground, then locate the nearby keyhole.  Tap your Key Card at the keyhole and this should open the Magic Portal to begin the game.

You will need to go to 4 or 5 portals in order to defeat a villain. In some portals, you will face the villain or their henchmen, while other portals will require the use of spell cards. Do not fret – Merlin will let you know when to use your spell card.

Once you have defeated a villain, you will then receive instructions as to which portal to go to next. After you have defeated all the villains, you are now ready to confront Hades in the final battle. Defeat Hades and you win the game and save Magic Kingdom from the forces of evil!

Sorcerers of the Magic Kingdom Map

Here are Sorcerers of the Magic Kingdom maps of each land. As we previously stated, Tomorrowland is the only land where the game is not played. 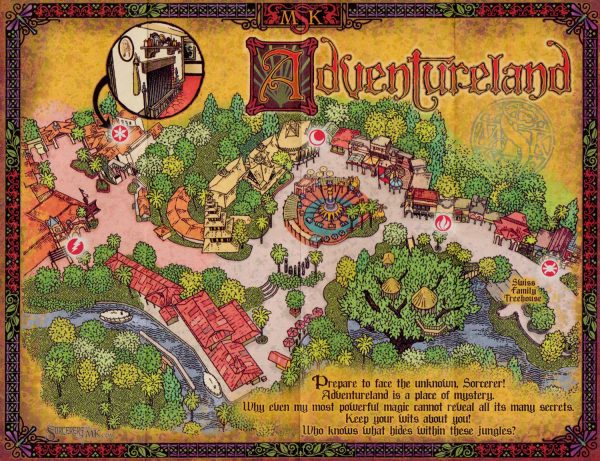 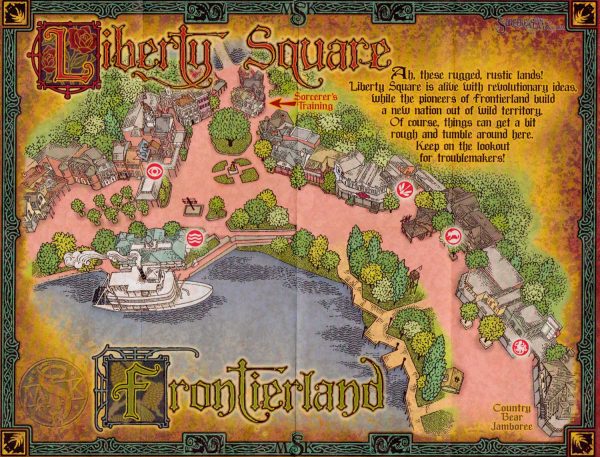 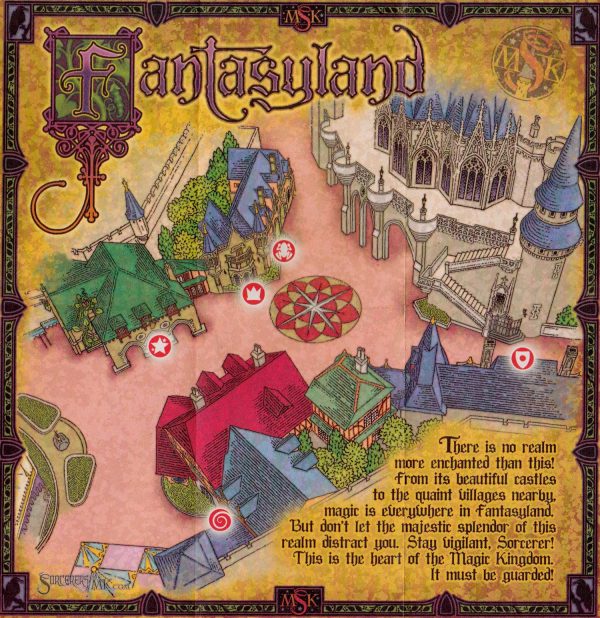 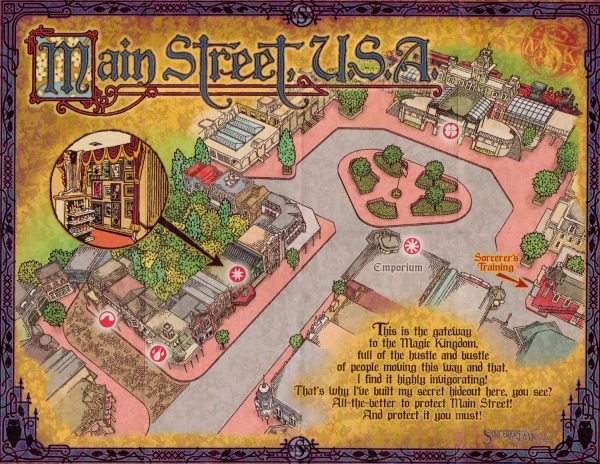 Sorcerers of the Magic Kingdom Cards 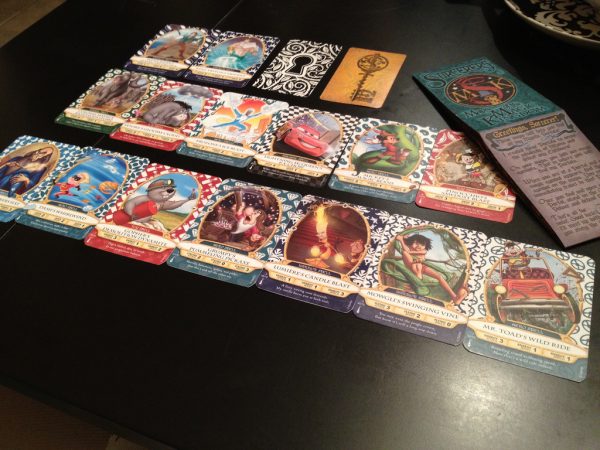 Here are a few things you should know about Sorcerers of the Magic Kingdom playing cards:

Sorcerers of the Magic Kingdom Tips and Tricks 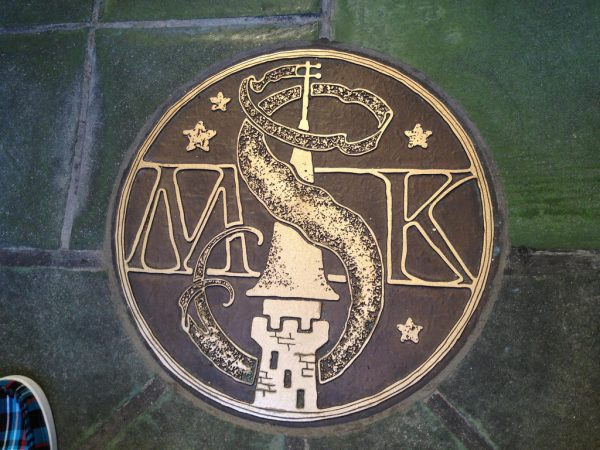 We hope our Sorcerers of the Magic Kingdom page has piqued your interest in this fun and engaging scavenger hunt.